Lyracle is an early music chamber ensemble whose mission is to illuminate our shared humanity across centuries through historically informed performances that explore the art of accompanying the voice with the viol and tell the stories of historic practitioners of this art. Founded in 2018, Lyracle is proud to launch its own self-produced concert series in Greater Boston in the 2022-2023 season.

Lyracle’s narrative, non-composer-centric approach to concert programming has earned it recognition as an emerging ensemble in the field. Lyracle was one of four ensembles selected to participate in the 2020 Early Music America Emerging Artist Showcase and performed at the 58th Conclave of the Viola da Gamba Society of America. Lyracle has also been invited to perform on concert series including Early Music Missouri, Pegasus Rising, GEMS Midtown Concerts, the Long Island Early Music Festival, and the Society for Historically Informed Performance.

Lyracle has performed and coached students at several institutions of higher education, including UNC Chapel Hill and UMass Amherst (upcoming).

Lyracle has given presentations on their research and curatorial processes at the Low Strings in the Early Americas Online Symposium and at the Sixth-Annual Indiana University Jacobs School Of Music Historical Performance Conference. Lyracle enjoys collaborating with artists and scholars in adjacent fields and in 2022 gave a lecture-recital with historian Barbara Lambert at the Colonial Society of Massachusetts.

Lyracle is a registered 501(c)(3) nonprofit and has received grants from the Massachusetts Cultural Council and the Iguana Music Fund. Mezzo-soprano Ashley Mulcahy is a recent graduate of the Voxtet Program (MM ‘19) at the Yale School of Music and Institute of Sacred Music, which provides four students each year a full scholarship to study early music, oratorio, and chamber music. At Yale, Ashley studied with James Taylor and had the opportunity to work with many internationally renowned conductors, including Nicholas McGegan, Masaaki Suzuki, David Hill, and Simon Carrington, and performed at venues such as Carnegie Hall, Alice Tully Hall, and the Leipzig Gewandhaus. Ashley has performed with numerous ensembles including Bach Collegium Japan, Theatre of Voices, New York State Baroque, The Newberry Consort, Music of the Baroque, and the Handel and Haydn Society. She recently relocated to the Boston area, where she is a regular soloist at Marsh Chapel, under the direction of Scott Allen Jarrett. Ashley was a Young Artist at the 2017 Boston Early Music Festival and earned a BA in Italian and a BM in vocal performance from the University of Michigan, where she studied with Carmen Pelton. James Perretta is a Boston-based viola da gamba player who is active as a performer, arranger, and teacher. For Lyracle’s concert programs, James arranges polyphonic madrigals for voice and viol, synergizing his facility on the viol with his knowledge of 16th and 17th century counterpoint. He is also active on TikTok and YouTube where he records his own arrangements of video game music for solo viol or viol consort. James enjoys working on projects that span multiple genres and explore the use of extended techniques on the viol. He currently teaches private lessons, group classes, and workshops at the Powers Music School in Belmont, MA and has performed with viol consort Long and Away. James holds a B.M. in Cello Performance and a M.S. in Computer Science from the University of Michigan, where he studied modern cello with Richard Aaron and Baroque cello and viola da gamba with Enid Sutherland. He is currently pursuing a Ph.D. in Computer Science at Northeastern University, hoping to pursue a dual-career as a musician and Computer Science teacher. 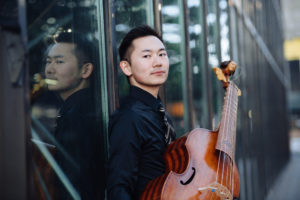 Gold medalist and first-ever American laureate of the 7th International Bach-Abel Competition Arnie Tanimoto has quickly established himself as one of the foremost viol players in the US. He has performed and recorded in venues across North America and Europe with the likes of Barthold Kuijken, the Boston Early Music Festival Ensemble, and the Smithsonian Consort of Viols. Arnie was the first-ever viola da gamba major at the Juilliard School, where he soloed on both viola da gamba and baroque cello. In 2017 he was awarded with a Frank Huntington Beebe Fund Fellowship and subsequently finished his studies at the Schola Cantorum Basiliensis in Basel, Switzerland. His principal teachers include Paolo Pandolfo, Sarah Cunningham, and Christel Thielmann. As a teacher, Arnie has served on faculty at the Mountainside Baroque Summer Academy, Viols West Workshop, and Viola da Gamba Society Conclave. He holds additional degrees from Oberlin Conservatory and the Eastman School of Music. 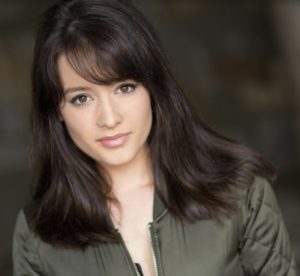 Danielle Boivin is an actor, musician, and writer in New York City. She is found regularly performing at the Stonewall Inn, and works in documentary and media production with YouMatter Studios. She will be releasing her debut EP later this year